so close, yet so far

bailey was minding her own business when all of a sudden a lizard invaded her domain appeared on our patio. when they saw each other it turned into a staring contest. it was like a scene from a gunfight at the o.k. corral, just waiting to see who was gonna make the first move. only problem is bailey was inside and the lizard was outside. i don't think the lizard would have been so brave if there wasn't a glass door between them. well the lizard made the first move and lost the staring contest. bailey then became very upset that she couldn't forcibly remove it from our property chase it away. 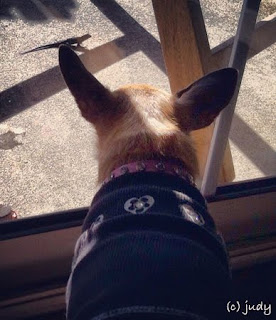 Posted by coffeedog at 6:00 AM