saturday, on our way to coffee, we happened upon a chocolate lab that had just been hit by a car. he was laying in the middle of the street all alone, so of course we pulled over to see if we could help. i stayed in the car with bailey and called 911 while hubby went to see if there was anything he could do, and to block traffic so another car didn't come and run him over. the lady in yellow was a witness to the accident and came over right after we got there. 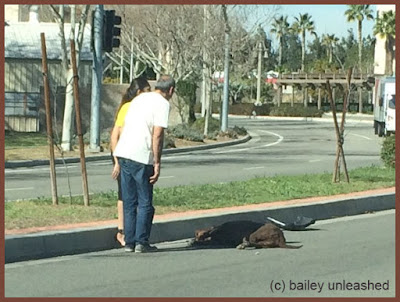 the lady that hit the dog, came to say she said she didn't see him until it was too late. she also said she had her 7 year old grand daughter in the car with her. 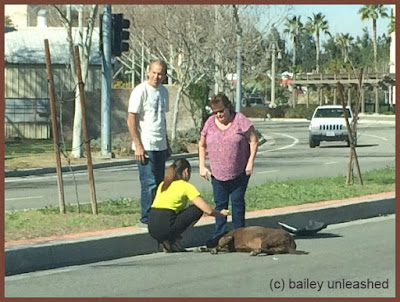 next, the guy with the cap stopped to see if he could lend a hand. he said he had just lost his dog to cancer :( and see that gallon of water on the ground? another person that was driving by, gave it to them so they could cool the dog off. the dog was obviously in pain but he still managed to wag his tail. he knew we were all there to help him. 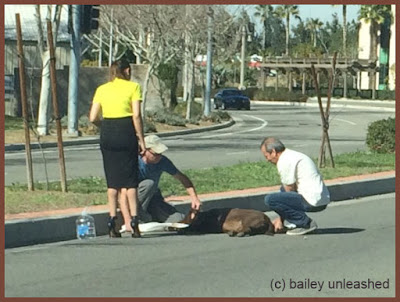 it was dangerous to stay in the street, and it was really hot for the poor dog, so they had to get it to a safer location. we had a blanket in our car, so hubby and the guy with the cap, carefully slid the dog onto the blanket to get him out of the busy street while everyone waited for help to arrive. 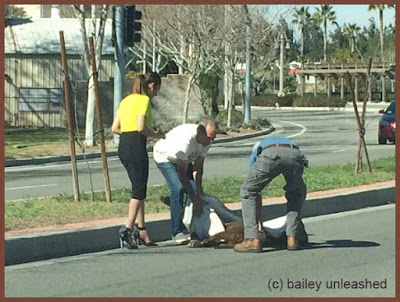 the dog was pretty heavy so i'm glad there was another man there to help hubby. 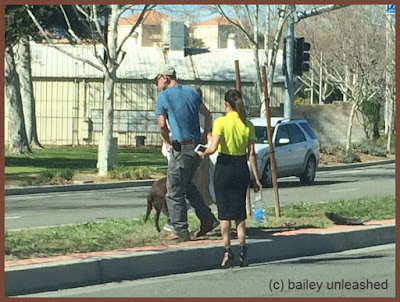 they placed him on the lawn under a tree and poured the water on him to cool him off. 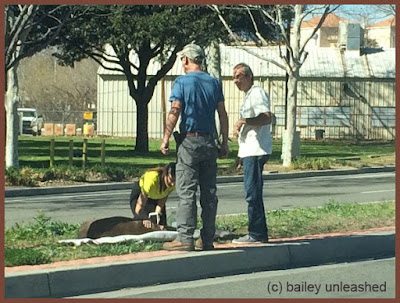 20 minutes went by and still no animal control, so the lady in yellow gives them another call. the guy in the vest, had been watching from across the street, so he came by and brought more water. 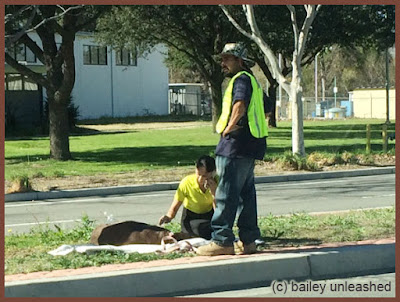 i don't know when animal control got there but the owner of the dog finally showed up. i don't know what she was thinking but she showed up with a leash in her hand. did she think she was going to leash him up and take him home? ya, i don't think so.
dear chocolate lab, wherever you are, we are sending you POTP.
and to all the strangers that came together that day to lend a hand, for a dog - you all rock.

Posted by coffeedog at 1:10 AM